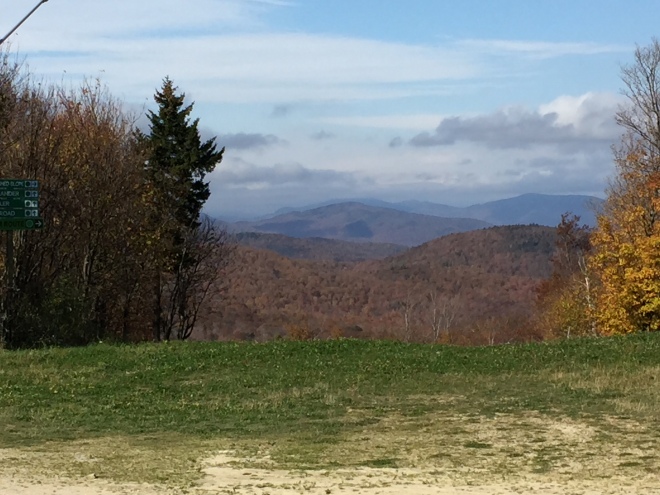 A few days ago, one of my Facebook buds, Gail, submitted a post about cancer on her Facebook page. I’ve been thinking about it since I saw it.

This past weekend, I decided to stay home instead of driving to Middletown to see mom. But as I was hanging out, I thought about how beautiful it was to be back in New England in the Fall. So I grabbed my camera and started driving and ended up at Killington, on the Gondola looking out of the window at the foliage and the mountain bikers tackling the trails. It was weird to be there in the Fall with no snow on the ground. But then I looked down and saw this (photo).

This is the top of Cascade – my all time favorite ski trail which I love because of the trail’s long and very steep pitch. I used to ski it all the time with my uncle whom, along with my aunt Karen, taught ski school in their 60’s. At that time, My uncle Walt had this thing for “jetstix” – those hard plastic things you could attach to your boots to be able to sit back on your skis. He would fly ahead of me doing turn after turn and usually end up at the bottom of the trail before I would… about 10 minutes later. He skied on shorter skis and would rag on me about my unwillingness to give up my 195’s. And – because the moguls were cut by smaller sized skis, I would fall frequently – and a fall on cascade just went on forever because there was that pitch and not a lot of flat surfaces to land. It was always a very fun and amazing time skiing with him – even given the bruises from falling so far for so long.

Sitting there on the gondola looking down at the fall line, it was hard not to get emotional as I miss him and those times we spent skiing. So I sent the short text and photo to Karen, my aunt, who is in Maine and we have since reminisced about those great memories.

Walt lost his battle with cancer several years ago and in a few weeks, it will be 3 years since Dad lost his. These great memories of skiing with Walt and with my mom and dad came back full force when I looked out the window and saw the black Cascade trail sign.

S.A. Leys is a consultant and coach with 25 years of expertise in coaching the healthcare professionals and teams who care for all of us. I also coach individuals who work in fast-paced, high-stress careers which requiring compassion, analytical and critical thinking strategies who are interested in achieving their fullest potential in their lives, relationships, and careers. Let me know if I can help you too. Contact me at www.SusanLeys.com View all posts by SALeys